A linked list is a data structure that holds objects arranged in a linear order, this order is determined by a pointer in each node. Unlike an array, a linked list doesn't provide constant-time access to a particular index, you have to iterate through the list to find an element, on the other hand, is possible to add and remove items from the beginning of the list in a constant time. Linked lists can be used to implement other data structures, such as stacks, queues, and graphs.

There are some types of linked lists: 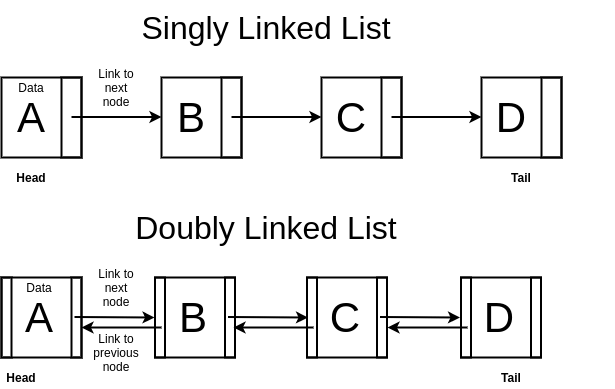 Deletion - Follow a similar logic of insertion, if you want to remove a node from the middle of the list, you just have to make the target's previous node point to the target's next node. In a doubly-linked list, you have to take care of the previous pointer too.

Traverse - Each node has a point to next, so you start from the node head and follow the pointers until the last node, which will not point to any node (in a non-circular linked list)

This technique consists in iterate through a linked list with two pointers, a slow and a fast which will be ahead of the slow pointer by n nodes.

This is useful to solve some problems with a linked list, like detecting a cycle or finding the middle node of a linked list when you don't know its size.